art that truly lives on 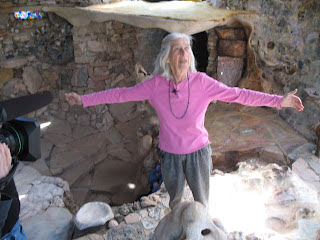 Woke up bright and early in Flagstaff (Mountain non-DST sun seems to show up fast) with Elifante on our mind.  Our guide to this jaw-dropping sculpture village and residence built by Michael and Leda Kahn wanted to meet in Sedona at 8 AM.  I want it on the record that we hit the Safeway parking lot at the exact moment!  A good omen, and we happily followed J.D. down to Cornville, a far less busy town off 89A.
Michael, we knew, had passed away in March, after a battle with Pick's Disease. a form of Alazheimers that had reduced him to just two words, though he continued to paint right on up to the end.  Not surprising when you start seeing the scope of work that went into the place,  all the rocks that were moved, the beams that were raised and the painting that was done in the thirty years since the couple arrived.  Completely jaw-dropping in its diversity and its execution.   Michael wasn't a morning or evening person, Leda says, he was both.
Elifante encompasses a number of non-traditional structures, like the Hippodome, where they eventually lived, Pipe Dreams (a gallery for Michael's paintings), the Winter Palace, the Bath House and so on.   There are gardens, trees they've planted, even a nennis court.  That's tennis with no net, and definitely, she told us, no rules.
It seems almost condescending to point out the hobbit-ness of the place, but the world Peter Jackson built for the movies is eerily close to Elifante in many ways.  It's shapes and passages,
playfulness and functionality are magical.  We've seen nothing quite like it before, and that's something I don't say lightly.  We're sorry we couldn't meet Michael, but the work he made, and the look in Leda's eyes as she talked about him spoke volumes in his absence.
We're lucky guys. and we know it.
And just to top it off, we pulled the plug early, and headed for Jerome, an old mining town at the top of a hill that counter-culture types reclaimed in the 70s.  Of course, it's also a hotbed of the paranormal, and our night's lodging spot, the Grand Hotel is reputed to be ghost central. Who'll be Scully tonight?
Music In the Van--Regina Spektor (a favorite of Larry Harris', whose "endorsement" helped convince Leda to grant our request.  Thanks, Lar)
Highest Gas Price-- $4.39 (diesel) two days ago in New Mexico.
And while we're playing the addendum game, the CD from yesterday I couldn't name was "Actual Size" which might be the title or it might be the artist, but it was funny and pretty darned good.  Gracias Joe Khron of Lawrence, Kansas.
Posted by tv weasel at 6:35 PM