the end o' the line 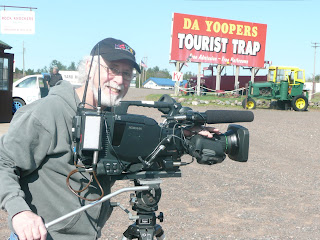 You've gotta like a place that's honest about its intentions.  Da Yoopers Tourist Trap in Ishpeming, Michigan qualifies.  They want to sell you all things U.P. and entertain you a bit while you're there.  The snow pole out front, which showed how high the 272 inches that fell one winter really is, certainly caught our attention.  As did the World's Largest Rifle, built by Tom Moran, whose ironworks we saw in Onaway a few days back.  And a very cool hand-made map that covered an entire wall, along with a Yooper version of the internet.
We used the parking lot for some show-ending catch, bought souvenirs aplenty, and started the long drive back.  Yep, these six shows are now shot, and we're sitting in an Iowa hotel, amazed that twelve hours ago, we were a mile from Lake Superior.  I'm bushed, and pleased that after almost 5,000 maniac miles, we're right on schedule.  It's almost as if WE KNEW WHAT WE WERE DOING!  Hope that when the shows are put together, I'll still think so (and you will too.)
Music In the Van--James McMurtry's new one, Old 97's "Fight Songs", "K.T. Tunstall "Drastic Fantastic", Dr. John "Live at Tipitina's"
Don's found $$--Another day with nothing!   Is it the recession or what?  Final totals are sketechy, but somewhere just over $6.00
Posted by tv weasel at 10:55 PM

when will all this be on tv????
-Minnesota fan

Locally (Kansas City) it should be mid-winter. Nationally, in the spring 2010. Be sure to check with your local PBS station and ask them to carry the show if it currently isn't available.

I stumbled on this show by accident -- and am totally hooked! There's a certain charm in the places visited and the people along the way.

I'm in the Twin Cities and it's on TPTMN -- one of the Minnesota PBS stations. And it's on at 11 PM so it's a great way to wind down at the end of the day.

I used to watch RVRR when I lived in KC - 1995-2002. Imagine my surprise when insomnia settled in tonight and I found an episode being broadcast on your sister station, KETC 9 in St. Louis. As always, a terrific show, and I certainly missed Don's 'Tom Bodett-esque' narration and camera-work! Thanks guys!!